Much like genealogical research, photo collecting can be a serendipitous process – sometimes one finds answers, and interesting ones at that, when least expected.
View on Facebook
·Share

Share on FacebookShare on TwitterShare on Linked InShare by Email

One of my favorite things to do is travel. When that isn’t possible, I try to travel vicariously through the experiences of someone else.
View on Facebook
·Share

Share on FacebookShare on TwitterShare on Linked InShare by Email

Check Out Our Videos

The Clark County Genealogical Society Endowment Fund is established to promote the future study and practice of genealogy and the preservation of historical and genealogical material, by new means and methods that otherwise are not available to the Society under existing sources of funding.

Planned giving is and should be distinguished from annual membership financial support. Annual membership support is important and necessary to fund existing library activity, education, and administration of the Society. As funds allow, annual membership support can at times be used to create new activities and services. From time to time, however, further expansion of the Society is beyond the resources available to any one generation, and the Endowment Fund is created to fund new activities and services that would not otherwise exist under the resources available to one generation alone. It is intended, however, that these new activities and services will be structured in a fashion that ultimately provides for their on-going existence without the perpetual assistance of the Endowment.

Examples of the uses to which the Endowment may be applied will range from the traditional, through the visionary, and to the uncharted (in a world of great change). Traditional uses of the Endowment might include the construction of new buildings, and the creation of new programs, enhancement of the capital fixtures of the society (eg. computers and storage systems). Visionary uses might include outreach to the community via genealogy programs for school children and seniors. We trust the wisdom of future generations to make appropriate use of the resources.

Because great change appears to be the one constant for the future, the Endowment Fund has not been restricted by concrete limitations on its spending, either as to income, manner of use, or kind of recipient, except as set forth in this Charter. An examination of current endowments at other institutions has, upon reflection, suggested that static and unchangeable charter restrictions can be counterproductive given the nature of change.

Notwithstanding the prospect of change, the Endowment is intended as a source that creates income for special, extraordinary, or multi-generational projects and endeavors. Accordingly, the principal (i.e., the corpus) of the Endowment shall be left intact, absent some amendment to this Charter. Allowing the capability to invade an Endowment’s principal leads to the ever present temptation to use it to fund current operations, to the inevitable detriment of membership support. All members must understand that planned gifts to the Endowment cannot be used to supplement current income or to substitute for other support. Donors to the planned giving program also must be assured that their expectations will be honored, and that all Boards of Directors will be committed to maintaining the entire principal of Endowment intact, for future growth.

Control of the Endowment Fund ultimately rests with the Board of Directors of the Clark County Genealogical Society. Vesting control in future Boards reflects the thought that control of substantial financial resources should rest in one place, lest competing constituencies develop for control over funds. Were control vested in some other entity, such as an Endowment Committee or independent Foundation, division often results. A house divided among itself cannot long stand, and it is the danger of such division that leads to vesting control in one entity. Endowment Funds shall be used by future Boards of Directors as persons of prudence, discretion, and intelligence would exercise in regard to the permanent disposition of their own families funds, had such funds been entrusted to their care for an express purpose, and not to stray from such purpose.

It is anticipated that some persons will provide gifts to the Endowment subject to certain stipulations or restrictions, for programs and incentives near to the heart of the donor. The Endowment Fund, if it accepts these gifts after a suitable and appropriate review, will honor these stipulations or restrictions, now and in the future. The wisdom, wishes, grace and vision that one member of the Society may experience and desire to reflect in a specialized and restricted Endowment gift should be honored by all generations of the Society.

Endowment Funds will be professionally managed. Liquid endowment fund assets shall be invested in no-load mutual funds as determined by the Board of Directors. The Society shall not be required to restore any value of principal lost due to market action.

Income from the fund may be distributed annually on or about the first day of the fiscal year of the Society, at the direction of the Board of Directors. All distribution of Endowment Funds is to require two signatures, that of the President of the Society and the Treasurer of the Society.

The Treasurer of the Clark County Genealogical Society shall keep correct and complete books and records of the Endowment account and of Endowment assets. A Planned Giving Committee shall be established, with duties that include but are not limited to managing a Wills awareness program; providing information to persons contemplating planned giving; reviewing and accepting gifts; and recognizing donors in an appropriate manner. The secretary of this Committee shall keep minutes of every meeting. The Planned Giving Committee shall meet at least quarterly and shall report annually in October to the Board of Directors regarding all transactions of this Committee.

There shall be a minimum of five (5) and a maximum of nine (9) voting members on the Planned Giving Committee, plus one ex-officio member from the Board of Directors. They shall be appointed by the Board of Directors and shall have three year terms, on a rotating basis that replaces approximately one-third (1/3) of the Committee membership each year. A member may be re-appointed to a second term after being off of the committee for a period of one year. Each Board of Directors will be asked to prepare, on an annual basis, a Statement of Current Endowment Policies, as a more specific statement of the vision of each Board with respect to the use and intentions for the Endowment. 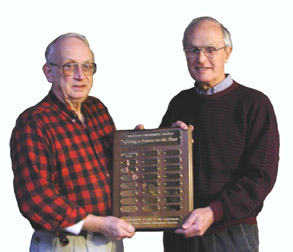 Tony Birch (left), a committee member, and Larry Bone (right), chairman of the Endowment Committee proudly present the plaque which will be on a wall of our library.

Your name can also be added to this beautiful plaque by naming CCGS in your will. You will never see your name engraved on the plaque but you can have the satisfaction of knowing ahead of time that it will be there!

A name is already on the plaque. It is that of Jean Glasgow Holroyd. Jean, a founding member of CCGS and a retired teacher, named CCGS in her will as one of the organizations to receive a portion of her estate. She passed away March 25, 2003 at the age of 87.